The government recently announced an overhaul in the right to work checks process. Employers do these checks on new people applying to work for them. It is a legal requirement to check that people working in the UK are here legally and have the right to work. The new checking rules came into force at the end of January 2019.

The changes are being made to try to simplify the process. An online checking service has been around since April 2018, but until now employers have still had to see paper documents. Usually, applicants bring their passports to interviews for checking. Employers must see either a European Union passport, or a visa giving right to work. Under the new system, some employers won’t have to see the paper documents in addition to doing the online checks. This should simplify the system, and make checks quicker too. It’s not just foreign workers affected by changes. Previously, British workers without a passport had issues proving their nationality. The new system allows employers to accept a national insurance number or birth certificate instead. 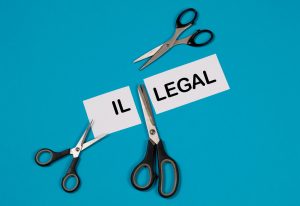 It’s up to employers to check the people working for them are in the UK legally. Companies found to be employing illegal workers are hit with very heavy fines of up to £20,000 per worker. Under the previous system, employers needed a system for verifying documents, taking copies of passports or identity cards, and storing them securely. Now, the employer just needs to check that the employee matches the photograph on their identification, and keep copies of the online checks. Employers aren’t expected to get it right all of the time. A determined fraudster with forged documents can be difficult to track down. Employers just have to prove that they’ve done their very best to comply with the rules and check identity.

Other Types of Checks

Although right to work checks are the most common checks for workers, they are by no means the only ones. Each employer will have their own way of checking people. Some might ask to see your exam passes, or University certificates. If you’re applying to work in a bank or with access to the company’s bank account, they might ask for a credit check. Most healthcare positions, or jobs working with children, will require a DBS check. This is a police records check into your criminal record. It was previously known as a criminal records bureau or CRB check.

What Do I Need to Know?

Firstly, it’s important to remember that all these checks are fairly standard. Employers shouldn’t be singling people out for checks and will usually run the same sorts of checks on everyone. You will need the originals of any documents you’re being asked to bring, and your employer might take a photocopy. They should store your documents securely. Most companies are very open and transparent about how they will run checks. If you’re not sure about something, don’t be afraid to ask.